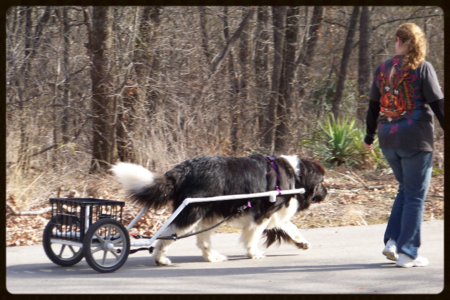 Although a superior water dog, the Newfoundland has been used and is still used in Newfoundland and Labrador as a true working dog, dragging carts, or more often carrying burdens as a packhorse.

The Newfoundland Club of America encourages its members to foster and maintain the working dog abilities that are such an important part of the history of the breed. Local clubs across the country are encouraged to host Draft Tests and training seminars to promote the working heritage of the Newfoundland dog.

The history of the Newfoundland not only reflects the courage and stamina exhibited in rescuing people from the water, but also shows the draft work abilities of the dogs. They were indispensable to local residents of Newfoundland, particularly fishermen, as the dogs helped them haul in the heavy fishing nets. The dogs were then hitched to carts or wagons to take the day’s catch to market and make other deliveries. They were also used to haul loads of firewood from the forests to their owner’s homes.

Draft work showcases a remarkable bond between dog and handler. The dogs learn many commands, such as back, slow left, right, and stop. They have been trained to ignore any intriguing distractions while harnessed and working. Their handlers learn how to verbally direct their dogs around and through numerous obstacles. The results are truly a team effort.

The NCA Draft Test is a series of exercises designed to promote the working heritage of the Newfoundland dog.

There are four parts to the Draft Test, all of which are done off-leash:

Upon successful completion of all components of the test, dogs are awarded the title of Draft Dog (DD).

Teams are also encouraged to enter, and follow the same requirements as a single dog.

Qualifying teams are awarded the title of Team Draft Dog.